Minnamurra Falls must be the spiritual home of the Lyrebird (at least an adopted one anyway). Nestled in a sandstone ampitheatre, rainforest gullies provide a sheltered haven for these charismatic birds.

Foxes are known to take juvenile Lyrebirds (Ref 1), and there is also evidence that fox control enables populations to rebound (Ref 2). Gratefully, there is a high priority placed on fox control in the National Park by the Plan of Management (Ref 3), and this geographic harbour with a good control program would make a strong-hold. The sheer sandstone cliffs surrounding the gully make a natural barrier to fox incursion from over-the-top, meaning fox control in this locality is easier than more open sites [i.e. those open to reinvasion from all sides].

Seeing Lyrebirds foraging so easily, with their entourage of Yellow Robins and Scrub Wrens picking up the crumbs, inspired me to scrounge around for further info on this amazing creature. So here are some curios I uncovered scratching the surface of the literature litter…

Interestingly, Lyrebirds are one species that has been successfully translocated for biodiversity conservation. In the 1930s, conservation-minded folks concerned with potential fox impacts on Lyrebirds decided to setup a population on the fox-free Tasmania.  Across 15 years to 1949 they shipped 22 to Tasmania. Decades later they are flourishing with 8,000 now serenading the wet forests of Tasmania – and no doubt helping to secure the long-term conservation of this species. However, I am left wondering what the early Lyrebird population founders thought of Tassie Devils?

Of course the call of the Lyrebird, and specifically its mimicry, is renowned – in Victoria Lyrebirds replicated 29 other bird species – elsewhere it has been widely reported they can mimic ‘human sounds’; chain saws, cars and motorbikes.

Amazingly, the new Lyrebirds of Tassie passed from one generation to the next – for forty years – the call of the Eastern Whipbird, although the species was not physically present in Tasmania, its calls echoed through Tasmanian forests (Ref 4 & 5).

Lyrebird mimicry is so good – a recording of a Lyrebird call played back to Grey Shrike-thrushes will cause them to be attracted to the speaker playing the call (Ref 6). 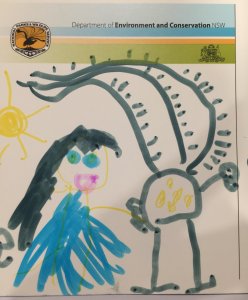 Groovin’ to the beats

More recent behavioural research has shown that not only are Lyrebirds creating the beats, but the males are putting dance moves down to go with them.

Male Lyrebirds matched ‘subsets of songs from their extensive vocal repertoire with different combinations of tail, wing and leg movements … and so appear to engage in intentional choreography’ (Ref 7).

In the absence of spectacular colours, Lyrebirds have gone for tunes, grooves and a special harp-like tail to woo the ladies.

The boardwalks are amazing, the ecosystem engineering on the way is obvious, and the waterfall isn’t too shabby either…

Being an ecosystem engineer, the Tasmanians are somewhat concerned about the Lyrebird’s potential impacts on locally endemic species – but the jury is still out on the materiality of this risk (and in all likelihood it probably pales to insignificance in the context of Forestry and the risk of fox incursion to the State).