A ‘Boy’s Own’ Hawaiian Eco-adventure

“In a nutshell the army has to adhere to the Endangered Species Act… nothing can go extinct on their their watch.”

This guest-post from my mate Graham Fifield (of Flick and Fly Journal) undertaking an internship in Hawaii, gives Australia great insights into how much communities will invest in saving species when they are [nearly] all gone…

Half way through an internship with the Oahu Army Natural Resource Program (OANRP) and Pacific Co-operative Science Unit (PCSU) and the schedule is proving pretty tough, up at 5.20 am and in the car by 6. Not back home until about 6:30 pm after a full day of physical work and hiking, but Friday’s are a day off…

We have a cool car pool with 3-4 people for the 45 minute commute across the island to the army base at Wahiawa. Once we pass through the military check point we dodge all the soldiers doing their morning training on the way to our base yard.  There are three teams of 8 people who do all the bush crew work (including me), a nursery crew of 4, all of whom are guided by a dozen specialists in restoration, ungulates, rats, snails and plant genetics. Throw in a few admin support staff and important people and the whole group is about 50. Quite an operation!

In a nutshell the army has to adhere to the Endangered Species Act which means that nothing can go extinct on their land on their watch. The army owns about 20% of the island. Focusing on individual plants and animals is in stark contrast to Greening Australia where we usually do system re-vegetation right? In Hawaii we have about 12 plants, 1 bird and 3 species of tree snail in our care. The resources we throw at these things is staggering!

Known locations with these rare plants get treated with slug pellets once per month, have rat traps laid in grids around them, are weeded by hand and have pig and goat fences erected around them in extremely steep terrain using solid wire panel fencing.  The resources that go into the tree snails are particularly impressive. There are predator proof ‘snail jails’ (see photo of helicopter) which are chamelleon, rat and snail proof. The predatory rosy wolf snail is the biggest threat, followed by rats and then the lizards all of which gobble them up

Each day we cruise around in oversized American trucks to a site, load up our packs and our spiked shoes and trek up to 12 km in the forest. The work is super diverse and includes weeding, reloading rat traps, surveying snails, checking fences, weeding, taking cuttings for propagation, seed collection, weeding, laying slug pellets, monitoring rare plants – did I mention weeding? Anyway I’ve attached a few photos which capture some of this.

Combined with learning all the Hawaiian plants and weeds, it is a very steep learning curve – after each day my brain (and legs) need a good rest! 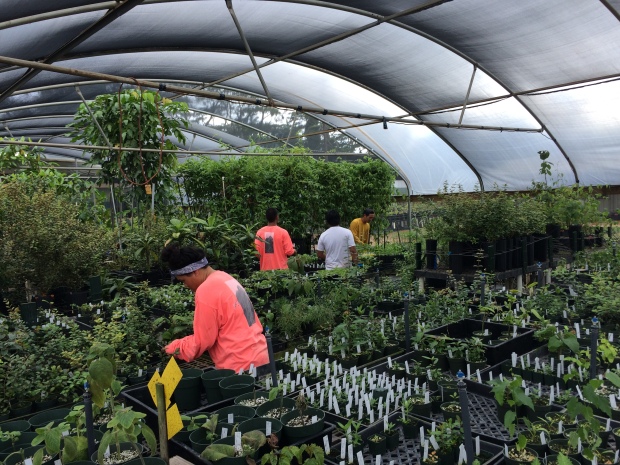