From Cambridge to Paradise

Most places I have visited during my Churchill Fellowship have been amazing and inspiring, but one has really challenged me…

England and Scotland are awash with memorials; remembering people, events and places from earlier times. Well, at Paradise Wildlife Park, I discovered a memorial to a time when kids played in nature. 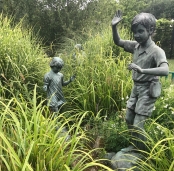 A memorial to kids playing in wetlands

We often lament the ever-apparent disconnection of people and nature, and especially in children – the growing gap between being grubby and gaming. But you don’t expect to ever find a memorial to the loss of this engagement.

The memorial itself is nestled, quite subtly, amongst the rambunctious engagements of a theme-park-style zoo – in the outskirts of London.  Between a climbing wall, large slippery dip, a 3 m tall plastic Gorilla for selfies and the gift shop, there is a nicely landscaped small wetland.

Within the wetlands are bronze statues of young kids, playing amongst the Phragmites and up to their solid ankles in the rich soft entanglement of roots and mud. When you approach the wetland, somewhat like a vacuum of sanctuary from the surrounding pandemonium, a soundtrack begins that invokes the bronze kids splashing about and having a great time, laughing, cajoling, falling in, like we did when we were kids.

It took me a few moments to recognise the voices were not from the big slippery dip nearby, but rather were a pre-recording to connect the bronze statues with our childhood memories of frog hunting. Ever since, I have been struck and somewhat challenged by this as a memorial to the lamented nature-engaged-child.

Art is meant to challenge, and the context here is especially gripping. Although you can spend a full day at the ‘Zoo’ with kids engaged in soft play (those padded playground climbing gyms), dodgem cars, obstacle courses, splash-play, Wiggles-style guided jazz dancing, riding the train, the traditional playground, and selfies with several larger-than-life endangered models, there wasn’t actually an opportunity for the kids to engage in a tactile way with nature.

Time for a grab with a Gorilla 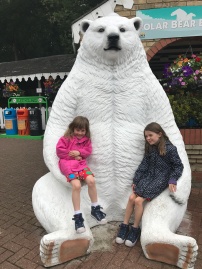 More time for a Polar Bear 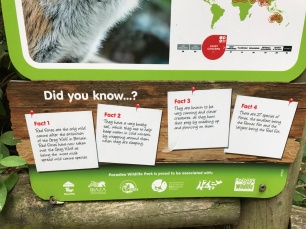 Red foxes are the only wild canine… 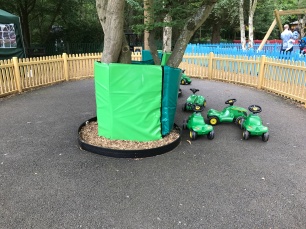 Time for a spot of go-carts between conservation?

Through the day I suspect we spent about half our time with the kids engaged in theme-park-style activities, and the other half in more traditional zoo wildlife viewing. As an amateur naturalist and leader in conservation, this was a very challenging experience, not the least of which was because, also a parent, I actually enjoyed the respite all the theme park activities gave by having our kids otherwise occupied [i.e. not nagging us].

Having visited more than a dozen nature-experiences in the UK, and engaging with many of their managers, I appreciate the commercial strategy at play here: it is all about ‘dwell-time’ – the longer we are on site the more money we will spend, and from a profit perspective, at relatively lower additional overheads (for each additional minute we stay beyond that we would have without all the anchoring activities).

Lots of people are working hard to bring the kids back out of the dark rooms and into the bright lights of nature. Only the day before finding Paradise, I met with Rob Macfarlane in Cambridge, where he highlighted the work of his charity Action for Conservation – a charity focused on reconnecting youth with nature – especially 11 to 18 year-olds. Amongst other things and under an amazing canopy, we discussed the importance of ‘creating wonder’ through engagement, to inspire a life of inquiry and nature discovery (a topic raised in his book Landmarks).

A beautiful Plane tree in the grounds of Emmanuel College

Nature taking back from the very old infrastructure at Cambridge

Cambridge is a very smart place for conversing…

On reflection, I think that is the secret to what was missing in this northern London Paradise, where the entertainment is amped up, but the engagement was diluted to the point of insincerity.

At Paradise, the content and stories are served up through every media possible to keep you on site and engaged and spending. However, despite all the tricks they used to keep people on-site, I think they maybe missed the best (and probably cheapest) one – actually give the kids a chance to get in touch with nature.

Instead of creating repeat-customers and members, can we rather create life-long ambassadors?

That notion of course assumes that the Zoo has an overarching biodiversity conservation imperative, and part of their objectives therein are to inspire future conservation ambassadors. Somewhat interestingly, despite being run as a family-business for many years, the Zoo has recently obtained charitable status in England, so maybe there is a transition to a not-for-profit model underway. You can make donations to the Zoological Society of Hertfordshire here…

For complete transparency – I gave the experience 4/5 stars on TripAdvisor – #totallyconflicted.

This study tour is sponsored by the Winston Churchill Memorial Trust and the Woodlands and Wetlands Trust.